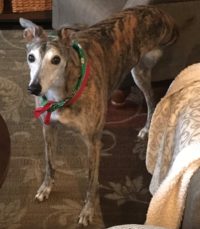 “Ruby was diagnosed with osteosarcoma in December 2016 after we noticed she was favoring her back left leg. Ruby’s veterinarian at the University of Missouri told us about the ELIAS trial and it was an obvious YES. Her care team told us Ruby tolerated the treatments well, although she was an escape artist getting out of the cone!

Today, Ruby is alive and thriving. She turned 12 in August 2020 and has more energy now than ever before. She loves to run, chase birds and rabbits, and going on walks. We recently moved from MO to MI and when it snows (which is often), she loves running in it. Ruby is a gem and we are so happy those years with her have been extended.” 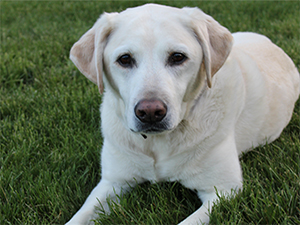 “Echo was diagnosed with osteosarcoma of the left distal tibia on May 16, 2017. All the stars aligned and she was included in the clinical trial at the University of Missouri. Her left hind leg was amputated, she received three autologous vaccines and apheresis, followed by 5 doses of IL-2. In February 2019, Echo still showed no signs of metastases and we could not be more thrilled with the results of the trial.

She enjoys an active lifestyle at home with her brother (litter mate), Houdini. They both love going for car rides and running alongside the bike. Echo can easily keep up with her brother, even with one limb missing.” 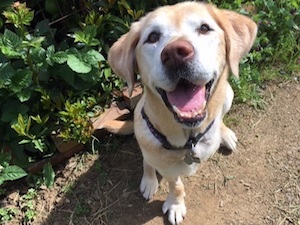 “Just before her 8th birthday, Millie was diagnosed with osteosarcoma and had her front left leg amputated in February 2019. In choosing options for treatment to keep the cancer from spreading, I learned about the immunotherapy trial at ELIAS which sounded really exciting. Millie completed her treatment at the beginning of April and she sailed right through without complications or side effects.

Today, she has pretty much gotten the hang of being a “tripawd” and she’s bopping around just like she used to before her diagnosis. I am so grateful for being a part of this study and I hope this helps other pups kick this disease to live a long and happy life!”