From Inspiration to Thriving – 4 Steps to Building a Successful Company | Step 4: The Pivot 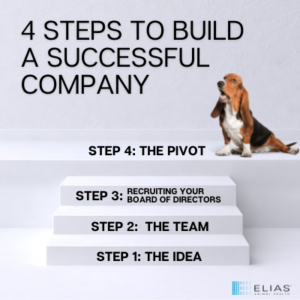 In this fourth and final installment of From Inspiration to Thriving – 4 Steps to Build a Successful Company, ELIAS Animal Health’s founder, Tammie Wahaus, discusses how Step 4: The Pivot, is essential to growth.

Our series started at the beginning with The Idea – the light bulb moment that births a company. We discovered that ideas are only ideas until The Team is in place to turn the idea into a tangible reality. Startup mode is tough, and even great teams have gaps. Your Board of Directors or Advisory Board should be comprised of seasoned professionals who will guide the company through the steps needed to achieve goals and growth.

Once those 3 key Steps have been accomplished, great companies position themselves to pivot and shift when circumstances arise that require a different approach. Over the past couple of years, pivoting has become synonymous with the word shift, but they’re actually very different. Both are change responses, and companies that are resistant to either are probably struggling no longer in business!

Merriam-Webster has several definitions of the word pivot. The most applicable to this discussion are these: as a noun, “a person, thing, or factor having a major or central role, function, or effect”, and as a verb, “to adapt or improve by adjusting or modifying something (such as a product, service, or strategy.)” None of them involve abandoning current strategy or upending business as usual, which is a shift.  Here’s the difference: A pivot is a turn around a central point (think a basketball player who has one foot glued to the floor and is frantically spinning around to find an open player), whereas a shift is a movement to a position away from that central point (change lanes to avoid a roadblock). They serve different purposes and yield different results.

Pivot vs. Shift – Our Story

In the case of ELIAS, we never imagined that a 2-year pandemic would disrupt things to the extent that it did. We partner with veterinary clinics across the country that conduct clinical trials of our life-saving therapies. Due to circumstances beyond everyone’s control, their ability to operate as they always had was fiercely interrupted when COVID hit. Seeing patients was a big challenge – regulations varied by state, staffing issues popped up, and added safety protocols greatly restricted the number of patients clinics could feasibly treat. We were slated to launch a large clinical trial right about the time everything shut down.

We had 2 choices – shift or pivot. The knee-jerk COVID reaction would have been a shift – to hold the trial, wait a few months until the crisis was over, and pick things up once the dust settled. Had we followed that course of inaction, we’d still be sitting here, waiting for the return to “normal!”

We opted to pivot. We couldn’t open the trial the way we’d normally do so because not all of the participating animal hospitals would be open and/or ready on launch day. Rather than one big launch, we implemented a gradual launch to ensure the hospitals were ready.

Pivoting isn’t simply responding or reacting to a changing environment (which sometimes includes ever-shifting regulatory issues); it is the willingness to recognize that things are or will soon be changing and being willing to adjust while holding true to your core mission and values. Sometimes pivots are large, almost full circles, and other times, they’re smaller. Successful companies are able to identify when things are changing, must be willing to make the correct shift or pivot, and are mindful of what research should be conducted before deciding what is required.

As an entrepreneur, what hurdle is in your path? Lean into The Idea, The Team, and Your Board to help you determine what that shift or pivot looks like.

Next week, we start a new series focused on health and translational medicine. Stay tuned!